Happy birthday Alexander! Our Alexander was born on July 20, 356 B.C., in Pella, Macedonia. 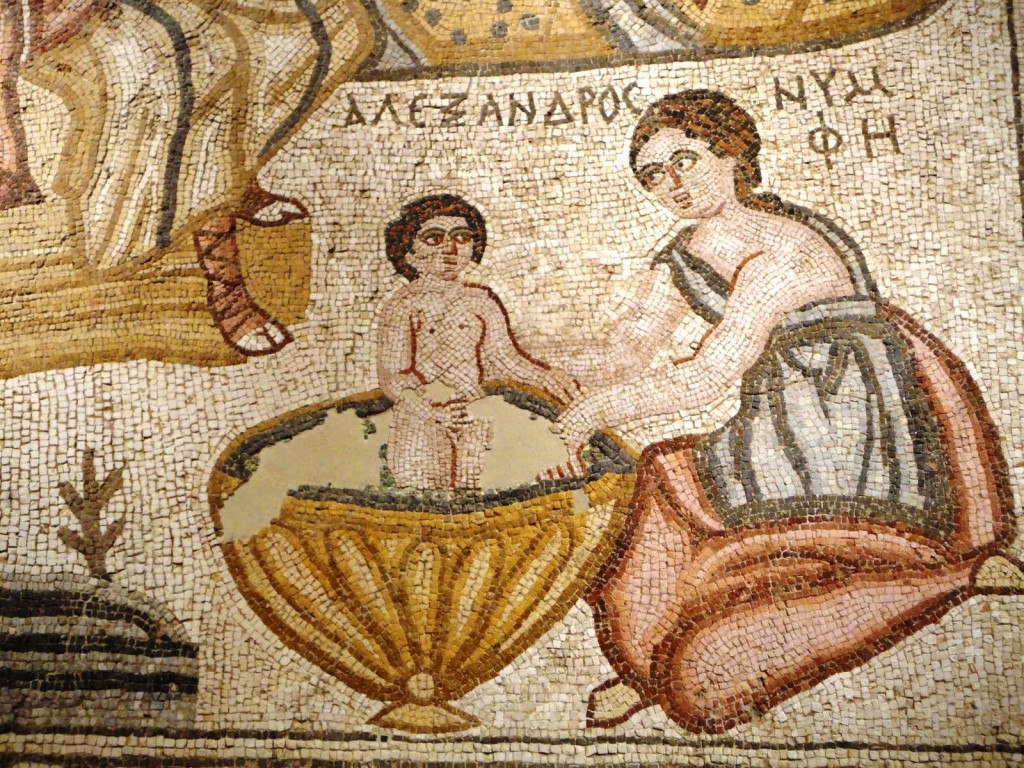 His father Philip, being in Samothrace, when he was quite young, fell in love there with Olympias, in company with whom he was initiated in the religious Caverian Mysteries ceremonies of the country, and her father and mother being both dead, soon after, with the consent of her brother, Arymbas, he married her.

The night before the consummation of their marriage, she dreamed that a thunderbolt fell upon her body, which kindled a great fire, whose divided flames dispersed themselves all about, and then were extinguished. And Philip, some time after he was married, dreamt that he sealed up his wife’s body with a seal, whose impression, as be fancied, was the figure of a lion. Some of the diviners interpreted this as a warning to Philip to look narrowly to his wife; but Aristander of Telmessus [1], considering how unusual it was to seal up anything that was empty, assured him the meaning of his dream was that the queen was with child of a boy, who would one day prove as stout and courageous as a lion.

Once, moreover, a serpent was found lying by Olympias as she slept [2], which more than anything else, it is said, abated Philip’s passion for her; and whether he feared her as an enchantress, or thought she had commerce with some god, and so looked on himself as excluded, he was ever after less fond of her conversation.

Others say, that the women of this country having always been extremely addicted to the enthusiastic Orphic rites, and the wild worship of Bacchus […], imitated in many things the practices of the Edonian and Thracian women about Mount Haemus [3] […]; and that Olympias, zealously, affecting these fanatical and enthusiastic inspirations, to perform them with more barbaric dread, was wont in the dances proper to these ceremonies to have great tame serpents about her, which sometimes creeping out of the ivy in the mystic fans, sometimes winding themselves about the sacred spears, and the women’s chaplets, made a spectacle which men could not look upon without terror.

Philip, after this vision, sent Chaeron of Megalopolis to consult the oracle of Apollo at Delphi, by which he was commanded to perform sacrifice, and henceforth pay particular honor, above all other gods, to Ammon [4]; and was told he should one day lose that eye with which he presumed to peep through that chink of the door, when he saw the god, under the form of a serpent, in the company of his wife [5].

Eratosthenes says that Olympias, when she attended Alexander on his way to the army in his first expedition, told him the secret of his birth, and bade him behave himself with courage suitable to his divine extraction. Others again affirm that she wholly disclaimed any pretensions of the kind, and was wont to say, ‘When will Alexander leave off slandering me to Hera?’ [6]

Alexander was born the sixth of Hecatombaeon [7], which month the Macedonians call Lous, the same day that the temple of Artemis of Ephesus was burnt [8]; which Hegesias of Magnesia makes the occasion of a conceit, frigid enough to have stopped the conflagration. The temple, he says, took fire and was burnt while its mistress was absent, assisting at the birth of Alexander. And all the Eastern soothsayers who happened to be then at Ephesus, looking upon the ruin of this temple to be the forerunner of some other calamity, ran about the town, beating their faces, and crying that this day had brought forth something that would prove fatal and destructive to all Asia.

Just after Philip had taken Potidaea, he received these three messages at one time, that Parmenion had overthrown the Illyrians in a great battle, that his race-horse had won the course at the Olympic games, and that his wife had given birth to Alexander; with which being naturally well pleased, as an addition to his satisfaction, he was assured by the diviners that a son, whose birth was accompanied with three such successes, could not fail of being invincible.