Alexander’s father, Philip II of Macedonia, hired Aristotle, one of history’s greatest philosophers, to educate the 13-year-old prince. Little is known about Alexander’s three-year tutelage but presumably by the end of it Aristotle’s wise but worldly approach had sunk in. 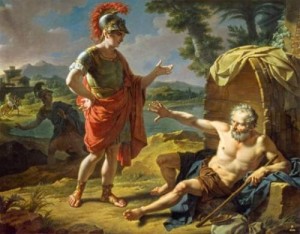 According to legend, while still a prince in Greece, Alexander sought out the famed ascetic Diogenes the Cynic, who rejected social niceties and slept in a large clay jar. Alexander approached the thinker in a public plaza, asking Diogenes if there was anything he in his great riches could do for him. “Yes,” Diogenes replied, “stand aside; you’re blocking my sun.” Alexander was charmed by Diogenes’ refusal to be impressed, stating, “If I were not Alexander, I would like to be Diogenes.”

Years later, in India, Alexander paused his military conquests to have lengthy discussions with the gymnosophists, “naked philosophers” from the Hindu or Jain religions who eschewed human vanity—and clothing.