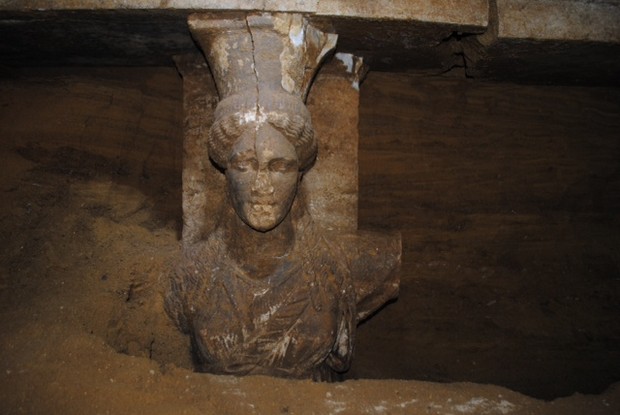 As officially announced by the Ministry of Culture of Hellas, with the removal of the sandy soil, in the area in front of the second septal wall, two caryatids of exceptional art were revealed just beneath the marble architrave, between two pilasters also made of marble from the island of Thassos.

The face of the Caryatid on the west survives almost intact, while the one’s on the eastern side is missing. The caryatids have rich curls that cover their shoulders, bearing earrings, and wear a sleeved tunic. The right hand of the one and the left hand of the other are rised, so the movement symbolically prevents those who would attempt the enter to the tomb and they are inserts.

The same technique was used for the heads and the wings of the Sphinxes. On the forms, there are traces of red and blue, which refer to the type of Kore. Among the sandy soils fragments of the sculptures were found, such as portion of a palm and smaller fragments of their fingers.

The provision of the second entrance with the caryatids is an important finding, which suggests the idea that this is an outstanding monument of particular importance.