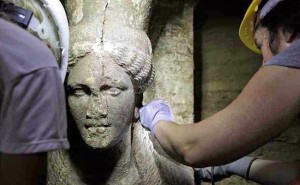 Ancient Amphipolis has already changed the known data in archaeology. The Caryatids, a creation of classical Greece, placed on a Macedonian tomb, make the monument unique .

Let’s briefly look at some data that will help us to understand what they have found so far in Amphipolis.

1) The combination of Caryatids (classical Greece) and Sphinxes (Egyptian roots) in a Macedonian tomb shows that we are talking about an unprecedented discovery, the same does not exist anywhere in Greece. Surely he or they who are buried there are not limited to the boundaries of Macedonia, these three elements photograph a person or persons who transcended the boundaries of Greece.

2) The size of the tomb is unique. The structure also unprecedented, with three antechambers, a fact that we have never met again.

3) The sealing is also the first time that we meet, so far we have already seen 6 “obstacles” to avoid the looting. (precinct, first sealing wall in front of the Sphinx, filling first antechamber, second wall sealing, filling second, third hall). Both Sphinxes, and the Caryatids with their posture and location, symbolize that they prohibit entry.

The claim of most historians that exclude an important person to be buried at Amphipolis, is based on the fact that there are no historical sources that indicate an important person was transferred in the city of Amphipolis at the time. The fact that the tomb is so majestic makes us suspect that whoever was the prospective tenant there would be a report, once such a majestic monument had been built. All potential persons that may be in the tomb, were absolutely worthy of mention by historians of the time. But there is no mention whatsoever. The fact that such an important funerary monument, has no mention of the sources of the time, makes us suspicious of two things. Whether someone was buried that they wanted to keep hidden, or the source that mentioned him was lost.
If the grave is as important as it seems, there should be some historical source that mentions him. There is none. Neither Pausanias, nor Diodorus Siculus, nor the Parian chronicle, have a reference about a tomb at Amphipolis, although they seem to give excellent information for that time.

So whoever was buried there, they wanted to keep him a secret, so they erased all the references so that the secret was never revealed. At this point, the reference of Diodorus Siculus may be the key.
Perdiccas, in his campaign trying ​​to steal the body of Alexander the Great, was defeated by Ptolemy the Savior, who had stolen the body of Alexander and moved it in Syria. A few months after,  Antipater was appointed regent. He appointed a meeting in Triparadisus in order to stop the differences amongst successors and there, Siculus says, he decided to that all kings should be transferred in Macedonia. Ptolemy also attended the meeting, who had possession of the body of Alexander the Great.

«Antipater himself with the kings and his own army went on into Macedonia in order to restore the kings to their native land» the text says.

The translation of the Loeb editions by Harvard, says in footnote 29 that at this point an important piece is missing.
«29 There appears to be a lacuna of considerable length at about this point».

Why this text was lost as the translation of Harvard suggests, no one knows. If it would’nt have been missing, however, we would have learned some very interesting things about what else was decided there.
The son, however, of Ptolemy the Savior, Ptolemy , wanted the body of Alexander the Great to be moved in Alexandria (from Memphis where it originally had been buried) as agreed by almost all sources known, as it gave him prestige and power to rule. On the contrary, in Macedonia none of the progeny wanted to maintain the memory of Alexander the Great.

Ptolemy Philadelphus however, was not interested in the Macedonian customs, because as Pausanias says, he decided to rule in accordance with the Egyptian laws, far away from the Macedonian traditions.

The Ptolemy Soter, Filadeflos’s father, who was a general of Alexander the Great, as sources say, had deceived once again Perdiccas, placing another mummy in the golden chariot that carried the dead Alexander, to mislead him, so that he would not get the corpse.