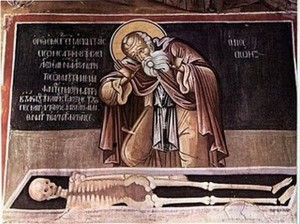 Saint Sisoes the Great, is a Saint of the Greek Orthodox Church.

He was a hermit, who came out of Egypt, and was known as the Great. He was a hermit at first in the desert and then on the same mountain that Anthony the Great had died. He died in 429 AD, after 62 years of ascetic life. His memory is honored on July 6.

Saint Sisoes once visited the tomb of Alexander the Great. When he stood in front of the grave and thought of the greatness, in which lived this glorious King of Greece, all the glory he had with his exploits in the wars that have made him a hero and conqueror of the time, he shuddered with the thought of how fickle life is and how transient glory is. He wept and mourned for the futility of all this, which was an effort that took all his life and did not offer him any good in his soul.

Students of Saint Sisoes painted the picture of their spiritual father near the tomb, and wrote the following epigram:

Looking at you, grave, I flinch in your theory, and shed tears from my heart, bearing in mind my debt that we owe all (ie death). How will I reach such an ending? Oh death, who can escape from you?

(The mural above, is located in the narthex of the Barlaam Monastery of Meteora (1566) and is the work of the priest George Sakellarios.)